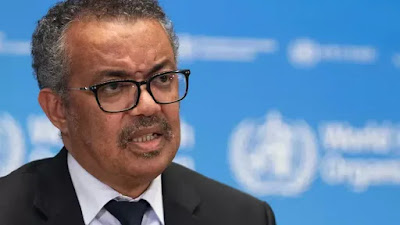 France 24: WHO says Covid-19 cases will soon hit 10 million markWorld Health Organization Director General Tedros Adhanom said on Wednesday he expected the number of novel coronavirus cases around the world, now at about 9.3 million, to reach 10 million next week.

Tedros also told a news briefing he backed Saudi Arabia’s decision to ban pilgrims from abroad from attending the annual Haj pilgrimage to help limit the spread of the virus.

He said WHO was now supporting many countries in dealing with difficulties obtaining oxygen concentrators, devices that boost the flow of oxygen to support the breathing of COVID-19 sufferers. “Demand is outstripping supply,” he said.

Hamas says annexation of West Bank would be ‘DECLARATION OF WAR’ that Israel would ‘regret bitterly’.

France, Germany and Italy call for end to Libya fighting.Sudan: Millions at risk if Ethiopia fills mega dam without deal.

WHO: Ebola outbreak that killed more than 2,000 in Congo is over.

Europe has seen a surge in coronavirus cases since easing lockdown, WHO warns, with 30 countries seeing numbers rise amid fears of a second wave.Coronavirus: ‘Very significant’ resurgences in Europe alarm WHO.

Germany and France shore up support for WHO, seek ‘global answer’ to Covid-19.

Trump says US moving some troops from Germany to Poland after Duda meeting.

Germany mulls measures against US over Nord Stream 2 sanctions – report.

Pompeo to press for action in EU talks on China.

Coronavirus: US cases ‘may have topped 20 million’.Some states pause reopening as virus cases near record high.

Leader of Seattle’s ‘autonomous zone’ says many protesters are leaving.

Changing face of America: Nonwhites and Hispanics now make up majority of people under age 16, as census data shows non-Hispanic whites could become a minority in 25 years.

FBI has over 200 domestic terrorism probes related to violent protests.

Banks lead gains for stocks on Wall Street in jumpy trading.Covid-19 sparks global economic ‘crisis like no other’, IMF says.

The Safety of Outdoor Air for #Coronavirus Is Now Obvious