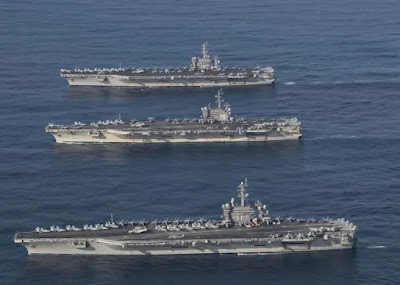 The US secretary of defence, Mark Esper, has announced an ambitious plan to expand the US Navy with a range of unmanned and autonomous ships, submarines and aircraft to confront the growing maritime challenge from China.

The Pentagon chief said a sweeping review of US naval power dubbed “Future Forward” had laid out a “game-changer” plan that would expand the US sea fleet to more than 355 ships, from the current 293.

The plan, which requires adding tens of billions of dollars to the US Navy’s budget between now and 2045, is aimed at maintaining superiority over Chinese naval forces, seen as the primary threat to the United States.

“The future fleet will be more balanced in its ability to deliver lethal effects from the air, from the sea, and from under the sea,” Esper said in a speech at the Rand Corporation in California on Wednesday.

WNU Editor: The US Secretary of Defense is confident that the US will be able to stand-up to China …. Pentagon chief says China is no match for the US Navy, even if it has more ships (Business Insider).

Minor earthquake, 3.2 mag has occurred near Chiniak in Alaska

Does Iran’s ‘Kowsar Fighter Jet’ Have A Chance Against Israeli F-35 Or U.S. F-22 Stealth Warplanes?

Astronauts are Getting a New Toilet Next Week