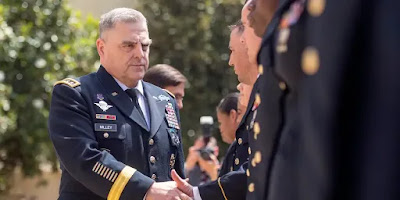 Business Insider: Top general slams Confederacy as ‘an act of treason’ and says the country needs to take ‘hard look’ at bases honoring its leaders* US Army Gen. Mark Milley, the chairman of the Joint Chiefs of Staff, discussed Thursday the possibility of renaming 10 US Army bases honoring Confederate leaders and said any change would require the utmost care.
* Milley labeled the Confederacy “an act of rebellion.”
* “It was an act of treason at the time against the Union, against the Stars and Stripes, against the US Constitution,” Milley said. “And those officers turned their back on their oath.”
* He estimated that minorities make up 43% of the US military and that at least 20% of soldiers in the Army are African American.

The top US military officer called the Confederacy “an act of rebellion,” one that violated the Constitution and went “against the Stars and Stripes,” as he addressed the topic of bases and statues named after Confederate leaders.

US Army Gen. Mark Milley, the chairman of the Joint Chiefs of Staff, discussed Thursday the possibility of renaming the 10 US Army bases named after Confederate leaders, such as Fort Pickett and Fort Hood. He appeared to express support for renaming the bases but said any plan for change would require the utmost care to prevent political consequences.

This is something I just had to share, it’s really interesting

Bangladeshi in Al Jazeera documentary: No review of remand order

The Fresno Nightcrawler is a cryptid that has been spotted on video multiple times mainly in the area of Fresno, California. CCTV footage shows that the creature is one of the more strange cryptids as it is totally white with 2 large legs and little to no upper body. Read more on Link. : mystery