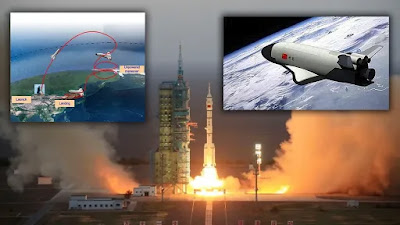 Warzone/The Drive: U.S. Confirms China Has Launched What Could Be Its Version Of The X-37B SpaceplaneThe reusable experimental spacecraft was launched into space on a secret mission from Inner Mongolia earlier today.

Beijing says it has successfully launched an uncrewed “reusable experimental spacecraft” from the Jiuquan Satellite Launch Center located in the Gobi Desert in northwest China. Space-Track.org, a U.S. government online database of public space launches that the U.S. military’s Combined Space Operations Center and the U.S.-Canadian North American Aerospace Defense Command maintain, confirmed that the “PRC TEST SPACECRAFT” successfully made it into space.

The as-yet-unknown space vehicle was delivered into low Earth orbit atop a Long March 2F carrier rocket on September 4, 2020. The launch was the 14th mission for the Long March 2F rocket and was apparently the result of months of preparations at Jiuquan.

The Leftist/Islamic Alliance in Action

Covid-19 news: Infection rate in England rises to one in 500 people