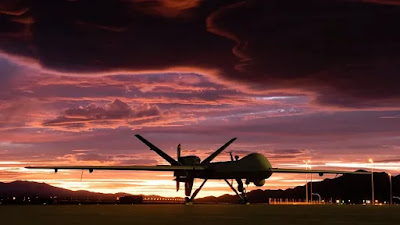 An MQ-9 Reaper was damaged after it departed the runway during takeoff at Holloman Air Force Base in New Mexico Sept. 2. Here, An MQ-9 sits on the flightline at Creech Air Force Base, Nev. (Airman 1st Class William Rio Rosado/Air Force)

National Defense: MQ-NEXT: Air Force Sets Sight on Reaper Drone ReplacementThe General Atomics-built MQ-9 Reaper — a medium-altitude, long-endurance unmanned aerial vehicle with millions of hours of operation under its belt — has had a ubiquitous presence over battlefields in the Middle East. But with the Pentagon preparing for future fights in contested, non-permissive environments against peer adversaries, the service is beginning its search for the aircraft’s replacement.

The Reaper — which is larger and carries more payload than its predecessor the MQ-1 Predator — provides the military with a “hunter-killer” capability by executing both strike and intelligence, surveillance and reconnaissance collection functions. But officials say it is time for a new platform that can take on those same missions and more.

The service signaled its intent in President Donald Trump’s fiscal year 2021 budget request by zeroing out its proposed buys of MQ-9s as it pursues a follow-on aircraft, though legislators may push back on the move.

WNU Editor: I have been reading more and more stories like this one in the past year …. MQ-9 damaged after running off runway at Holloman (Air Force Times). That tells me it is time to upgrade and/or find something better.