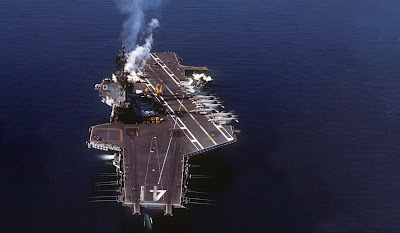 Jerry Hendrix, National Review: The Aircraft Carrier We Need A strategic design update is due

On April 24 the U.S. Navy announced that a fifth weapons elevator had been certified for use onboard the USS Gerald R. Ford (CVN-78). (A weapons elevator lifts munitions, such as bombs and missiles, from the storage area to the flight deck.) Six more elevators remain uncertified, requiring additional testing and modifications before the carrier can be deployed. Originally estimated to cost $10.5 billion to build, the ship was officially “delivered” to the Navy in May 2017, some 18 months behind schedule, at an eye-popping cost of $12.9 billion. However, even those cost numbers and dates are misleading, as the ship still does not have all of its essential systems certified, owing to major difficulties with its ship-service turbine generators, electromagnetic aircraft-launch systems, advanced arresting gear (the apparatus that slows down aircraft as they land on deck), and finally its weapons elevators. The upshot of all of these difficulties is that the Navy has been forced to use dollars from its crucial operations-and-maintenance accounts to “repair” a brand-new ship, for which it had already paid $13 billion, that has yet to deploy operationally, despite having officially been in the fleet for nearly three years.