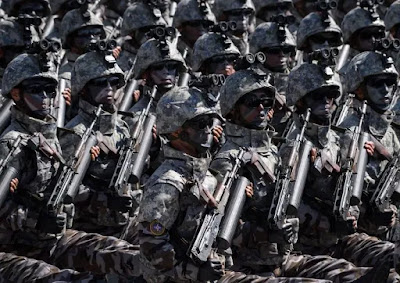 North Korean special forces, armed with modified AK rifles fitted with what are believed to be high-capacity magazines, parade through Pyongyang. Photo: AFP

Andrew Salmon, Asia Times: Nightmare scenarios: How Korean War 2 could igniteResumption of the 1950-53 conflict is more likely by accident than design – but North Korea believes it can win

Thursday, June 25, 2020, marks the 70th anniversary of the outbreak of one of the world’s cruelest and deadliest post-war conflicts, the Korean War.

In South Korea, there were no parades and little flag waving, for June 25 is a tragic date that does not merit celebration. It marks the 1950 North Korean invasion that initiated a vortex of carnage which would suck in troops from across the world, including the US and China, and leave the peninsula scattered with perhaps two million corpses

Today,147 sets of South Korean war remains returned from DNA testing at a US base in Hawaii to a ceremony attended by President Moon Jae-in. Veterans visited cemeteries, and museums held special exhibitions.

WNU Editor: The North Koreans are not the only ones who believe they can decisively win the next war. One of the most disturbing trends that I have seen in the past five years is the belief among many in China’s elite that they can win in a war against the U.S.. Nothing can be further from the truth.

Three sea turtles. The interesting thing is the statue looks older than the block it’s on. If you look you can see what looks like fresh whatever between them. It reads BROKE AND ANNE 2005 and WE CAN DO IT. 2005 is also the date on the back of the pic. I think it’s their statue. : mystery

The ‘morning star’ Venus is at its brightest for 2020 this week. Here’s how to see it.

‘Deniers’ of the World, Unite!