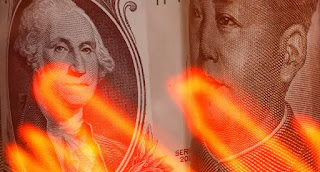 CNBC: China’s yuan could become the world’s third largest reserve currency in 10 years, Morgan Stanley predicts* Morgan Stanley analysts maintain their prediction that the Chinese yuan will account for 5% to 10% of global foreign exchange reserve assets by 2030. The yuan currently accounts for about 2% of global foreign exchange reserve assets, they said.
* That would put the yuan behind the U.S. dollar and the euro.
* Morgan Stanley expects the yuan to strengthen to 6.6 yuan versus the U.S. dollar by the end of 2021.

Increased foreign investment into Chinese markets could boost the usage of the yuan, pushing it to become the third largest reserve currency in the world — behind only the U.S. dollar and the euro, Morgan Stanley analysts predicted in a report distributed Friday.

The forecast comes as the Chinese government has been trying for years to promote the international use of the yuan, also known as the renminbi (RMB).

Right now, the yuan accounts for about 2% of global foreign exchange reserve assets, the report pointed out. But it could rise to between 5% and 10% by 2030, surpassing the levels of the Japanese yen and British pound, the analysts said. The forecast reiterates one that the bank made in February 2019.

WNU Editor: China will need to change its policies and regulations concerning foreign investment to make that happen.

Watts Available | Watts Up With That?

Is There Life on Venus? These Missions Could Find It

Statistics in the Time of Coronavirus: COVID-19-related Nonresponse in the CPS Household Survey