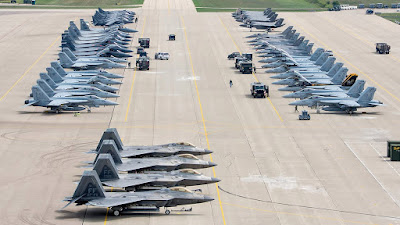 FOX News: Gen. Jeff Harrigian: Air superiority is fundamental for US Air Force, but our enemies are gaining groundWe must have a force that can compete, deter and win over near-peer adversaries in 2030 and beyond.

The U.S. Air Force is a powerful force today. If it is to remain so, prioritized investment is required. Failure to do so will cost our nation its edge over our adversaries.

Each and every day America’s joint team in Europe studies our adversaries’ actions and messages. We see their investments, tests and operations. One thing that is abundantly clear is our adversaries are gaining ground on their ability to threaten us from the air, both at home and abroad. If left unaddressed, we will soon see a day where we will fight to achieve air parity, let alone air superiority. Parity is unacceptable.

A Sort of Silencer: What is the U.S. Army’s New Smuzzle? — National Interest

How a U.S. Navy base in the Gulf tackles coronavirus — Reuters

Senate GOP coronavirus bill includes $29.4B for Pentagon — The Hill

In defense of Mark Esper — James Carafano and Thomas Spoehr, The Hill

Suicide by mailbox!? How do you hang yourself from a MAILBOX!?

An Assessment of State Voting Processes: Preparing for Elections During a Pandemic