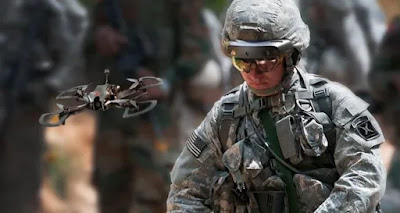 Israel’s Xtend is working with the Israeli and U.S. governments on a counter-drone augmented reality system. (Courtesy of Xtend)

The new pilot program — led by Israel’s Directorate of Defense Research and Development and the U.S. Combating Terrorism Technical Support Office — is based around the Israeli company Xtend’s Skylord counter-UAV system.

The program has thus far produced a drone system with an immersive interface that protects troops from various aerial threats, according to the Israeli Ministry of Defense. A user can wear goggles to see through the lens of the drone, and using a hand-held controller, can then fly the drone to observe a threat and use the drone’s hard kill ability to knock down the UAV threat.

WNU Editor: Why send soldiers into a building or to a hot zone when you can send in an armed  drone controlled by a soldier at a safe distance. This is going to be the future of warfare.