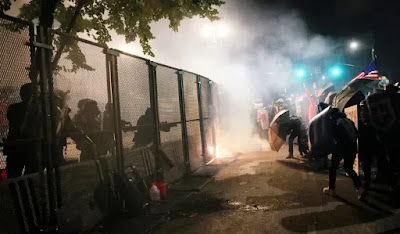 Victor Davis Hanson, National Review: Waiting for the Counterrevolution As the rioting continues, Democrats and the media attempt to blame it all on Trump, and most Americans watch and worry, in silence.

We are in the midst of a revolution, a cultural and racial one, that seeks to refute the past, damn the present, and hijack the future. So far, however, we have only heard from one side, the revolutionaries and their enablers themselves.

Those trying to reject and then reboot America are small as a percentage of the population, but their tactics are diverse, and their frightened abettors and closet appeasers numerous. The result for now is that, as with most cultural revolutions, a tiny percentage of the population seems to be ascending, given that there is no real organized resistance other than isolated and disgusted individuals.

The cultural revolutionaries are a tripartite group.

WNU Editor: When it comes to politics most of the people that I know in the US are progressive Democrats. And when I talk to them I tend to stay away from expressing my own political view. I am more interested in knowing what other people think and what drove them to have a point of view instead of pushing my own agenda. Unfortunately …. the pandemic and being busy for the past few months killed a lot of my free time to talk. But for the past two days I have had the chance to call a lot of my American friends, and to find out what is happening in their lives. The response has  been an eye-opening experience, especially when it came to politics and the current social unrest. My progressive friends in the U.S. despise President Trump, and that is something that has not changed int the past few years. But they also do not support the violence and destruction that they are seeing in many of America’s cities. One of my closest friends lives in Manhattan. He is a life-long Democrat who told me in 2016 that he was going to vote for Trump (albeit reluctantly), and was the first to tell me that President Trump was going to win the Presidency. So when I talked to him today I was curious to know what he was thinking. He spent a good five to ten minutes blasting President Trump, but spent the next 45 minutes blasting Democrats, from New York City mayor Bill de Blasio, New York Governor Cuomo, the Democrat Party, Congress, Biden, and the media. He is not happy. And he told me that even though he does not want to vote for President Trump again, he believes the alternative will be worse. And he is not alone. What I learned from my American friends is that a good part of the Democrat base no longer feel that they belong. That the party that they have always been proud to be a part of has now morphed into something that they cannot support. De-funding the police. Toppling George Washington statues. Vandalizing the Lincoln and World War II memorials. Riots and mayhem in cities that are primarily run by Democrats. Maybe some in the Democrat party support this. But among almost all of my Democrat friends. They do not want to be a part of this, nor have these people running the federal government. As for my Republican friends. That base is solidly behind President Trump. Definitely more so now than in 2016.

Update: It is too late …. Dems starting to panic that voters will blame them for riots (American Thinker).

Girl, 11, with Covid-19 may have died of organ failure syndrome linked to Kawasaki – World News

In The Name of God: A Communal Rupture Sowed By Communal Legacy