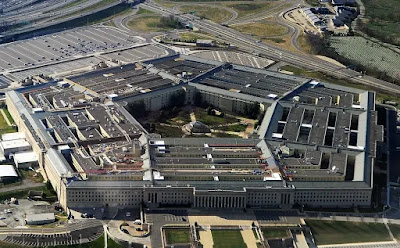 In closing the Pentagon, the military could stop rotating staff officers in and out of northern Virginia, a think tank analyst writes. (AFP)

James Hasik, Defense News: Close the Pentagon — it’s too big of a targetIn 1991, Gen. Chuck Horner showed video footage of the bombing of “the headquarters of my counterpart,” the commander of the Iraqi Air Force. Though American forces have sometimes proved less adept at destroying mobile targets, their fixed targets do not last long. This can go badly when targeteers misidentify a building, as during the 1999 Kosovo War, but the building is still destroyed.

In 2001, an attack against one of the five sides of the Pentagon killed 125 and forced a partial evacuation. The Defense Department showed impressive resilience: Even as one side of the building collapsed, its command center kept functioning. Conflict yet continues, in part because al-Qaida has few fixed targets to destroy. Thus for three decades, America’s wars have seemed either drive-by shootings or questionable quagmires. The next war that matters may be neither.

WNU Editor: The pandemic has forced employees to work remotely. And surprise …. among the people I know who run businesses they tell me that productivity has not suffered at all. It fact some are telling me that it has increased. The same can be said about the Pentagon. Most Pentagon employees are now working remotely, and apparently there has been no impact on productivity. So why not do it permanently, while also benefiting from making the Pentagon a less valuable target.

Minor earthquake, 2.82 mag has occurred near Stanley in Idaho

Brexit has now cost more than the International Space Station

A new view of Enceladus

Comparing death of Palestinians vs Zionists…