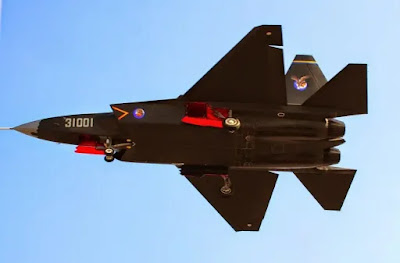 A May 5 report in the Global Times, an English-language Chinese newspaper, says the new photos show an … “upgraded version with modifications made to its aerodynamic design just like the prototype that made its maiden flight in 2016, instead of the original version that made its public debut at Airshow China in 2014.”

Improvements or changes to the J-31 likely continue a longstanding pattern of China’s apparent and somewhat visible effort to copy, steal or mirror designs used for the U.S. F-35. Virtually all photos and renderings of the J-31, since first unveiled, revealed a striking resemblance to the U.S. F-35. This does not come to the surprise of many in the U.S., given China’s well-known and documented cyberespionage efforts. A 2014 “U.S.-China Economic and Security Review Commission” congressional report specifically cites a Defense Science Board finding that Chinese cyberattacks resulted in the theft of significant specs and technical details of a range of U.S. weapons systems — including the F-35.

WNU Editor: I am willing to bet that the engine is not as good as the one on the F-35. And the avionics is probably years behind.

Why is space a vacuum?