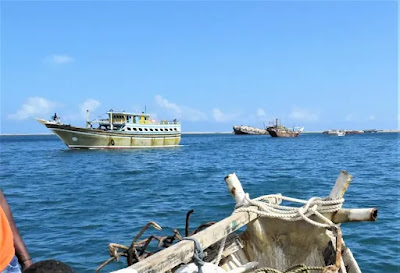 The Guardian: Iranian fleet accused of stealing Somalian fish despite acute food shortageEvidence from NGOs suggests fleet of up to 192 Iranian vessels could be one of the largest illegal fishing operations in the world

A large fleet of Iranian fishing vessels has been identified operating illegally in Somalian waters for over a year, depleting fish stocks in a country where one in three people face acute shortages of food.

The Somali government, which is unable to police its vast coastline, has expressed concern over food and maritime security and has called on Iran to investigate.

Analysis by Global Fishing Watch, a nonprofit which tracks vessels, and Trygg Mat Tracking, an NGO which provides fisheries intelligence and analysis to African coastal states to help fight illegal, unregulated and unreported (IUU) fishing, suggests it could be one of the largest illegal fishing operations in the world.

Alternate retellings of the same story in the Quran? : islam