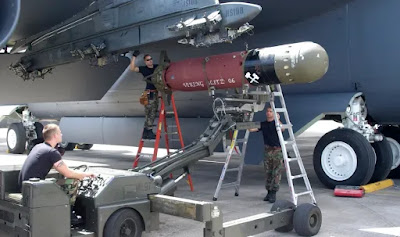 Bombers. Dropping mines. Lots of them.

According to a US Air Force wing commander, that’s what a US intervention might involve, should China decide to invade Taiwan.

The United States is obligated by law to assist in Taiwan’s defense.

In crossing the Taiwan Strait, a Chinese invasion fleet would face not only Taiwanese forces, but probably Americans forces, as well, David Axe of The National Interest reported.

China, for its part, has been rattling the invasion sabre at every opportunity, steadily building up the forces it could deploy in an attempted attack on Taiwan.

WNU Editor: If B-52s approach the Taiwan Strait with a Chinese invasion underway, these bombers will be shot down immediately.