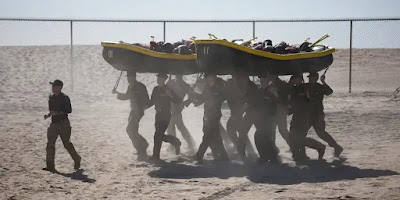 How long is Navy boot camp?

Navy Boot Camp is seven to eight weeks long, depending on scheduling. Navy Boot Camp resides at the Recruit Training Command (RTC) in Great Lakes, Illinois, which is in close proximity to Chicago. In Boot Camp, civilian recruits are transformed into Navy sailors.

During their time at RTC, recruits are subjected to physical training and military discipline. They are trained in subjects such as seamanship, small-arms familiarization, swimming qualification, firefighting, and ship damage control. Navy history, traditions, and core values are an integral part of the Boot Camp regimen, and recruits are constantly taught and questioned on these subjects.

WNU Editor: They are not paid enough.

Bill Hader as narrator for the new series

Rebuilding the energy base for real economic growth in South Africa

If you’re over 75, catching covid-19 can be like playing Russian roulette