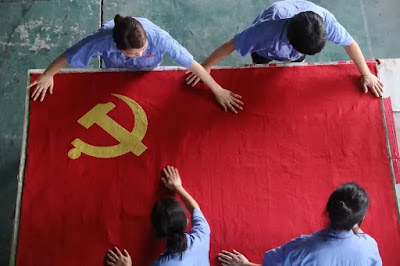 China is on course for a powerful future, according to a new US report. Photo: Reuters

Kinling Lo, SCMP: US must prepare for an ever more powerful China, think tank says* Rand Corporation considers how successful the ruling Communist Party is likely to be in achieving the goals it has set for the next 30 years
* ‘Preparing for a triumphant or ascending China seems most prudent for the United States,’ it says

The United States should prepare for an “ascendant” Communist-led China, according to a report released by Rand Corporation, a US government-funded think tank.

The compilers of “China’s Grand Strategy: Trends, Trajectories and Long-Term Competition” examined how successful the Chinese Communist Party was likely to be in achieving the goals it has set for the country by 2050.

The report, which was compiled for the US military and published last week, concluded that “ascendant” and “stagnant” were the most likely outcomes.

China Is What Orwell Feared — Ross Andersen, The Atlantic

China’s Model for Africa Is Failing — Thierry Pairault, The Diplomat

Lebanon as We Know It Is Dying — Steven Cook, Foreign Policy

In Zimbabwe, no one can breathe — Panashe Chigumadzi, African Argments

Lukashenko is playing games to keep his grip on power — Konstantin Eggert, DW

How can we apply lessons from the Spanish flu’s second wave to Covid-19? — Tom Wheeldon, France 24

What Australia can learn from other countries using internal border closures to prevent the spread of coronavirus — Max Walden, ABC News Online

MPO won’t be given to institutions which have no lands: Dipu Moni

The Beast of Gévaudan – In the early summer of 1764, a French farmhand had an encounter with a creature she couldn’t explain. This creature would go on to kill hundreds and terrorize the French Province of Gévaudan. What exactly this beast was is still unknown today.