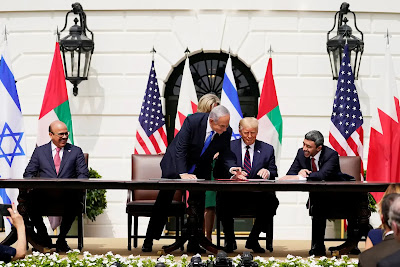 Count me among many Arabs who have long believed that the peace plan deserves a chance – albeit one of the few who says so publicly. I have held this view to the surprise of many American, Israeli, and Palestinian friends.

Americans I know disparage the architects — led by Trump’s son-in-law Jared Kushner — as too young and inexperienced to develop a viable solution.

Stumbling Out of the Middle East is No Better Than Stumbling In — Jon B. Alterman, Defense One

How to Do More With Less in the Middle East. American Policy in the Wake of the Pandemic — Mara Karlin and Tamara Cofman Wittes, Foreign Affairs

The F-35 Triangle: America, Israel, the United Arab Emirates — Barbara A. Leaf and Dana Stroul, War On The Rocks

The US-China tech cold war has turned hot – but would a Biden presidency change things for Huawei and others? — Yujie Xue and Celia Chen in Shenzhen, SCMP

Foreign-policy sleepwalking: Wake up to Germany no longer being such a good ally — John C. Hulsman, The Hill

Belarus: what is the mood like in the country? — The Guardian

Niger: Fear of terror — and the military — Silja Fröhlich, DW

How the Islamic State found a haven in Syrian desert — Sultan al-Kanj, Al-Monitor

Oil Demand Has Collapsed, And It Won’t Come Back Any Time Soon — Camila Domonoske, NPR

Bangladesh should aim to join Asean

Minor earthquake: M3.7 quake has struck near Srinagar in India

2014 MU69: Arrokoth, the most distant object ever explored