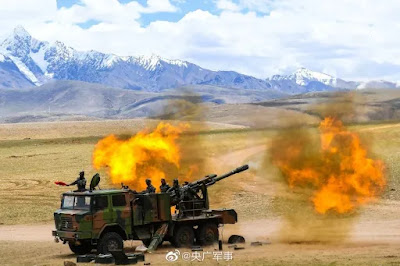 The Chinese military carries out a live-fire drill in Tibet as its tensions with India elevated following a deadly clash on the disputed Himalayan border. Photo: Weibo

China and India have both strengthened their military presence near their disputed border areas
after a violent clash last week that left at least 20 Indian soldiers dead.

Citing satellite images from a space technology company Maxar, Reuters reported on Thursday that China appeared to have built new structures near the site of the Himalayan border clash.

The images, taken on Monday, showed bunkers, tents and storage units for military hardware set up in an area where there were none last month.

Rebuilding the energy base for real economic growth in South Africa

If you’re over 75, catching covid-19 can be like playing Russian roulette

Got this weird message last night with no context from a random user, seems like it may have a underline meaning : mystery